You can present gabor patches using the jspsych-psychophysics plugin. 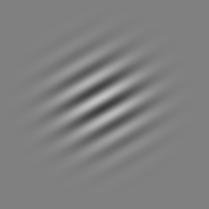 The calculation method for drawing is almost the same as the one used by the Psychtoolbox, although my plugin doesn’t use the procedural texture mapping and WebGL. I also have referenced the gaborgen-js code.

There are still the issues of display calibration and luminance resolution. Unfortunately, my plugin does not provide a solution to this problem.

See the Gabor section of Parameters of stimuli to learn how to draw the gabor patches.

You are capable of making a gabor patch drift. The Gabor patch drifts more smoothly when it is presented using the numeric.js more than using the math.js. However, its speed is not accurate when using either library.

By checking the averaged time of a frame, you can see how accurately the stimulus has been presented. The psychophysics plugin records the time (avg_frame_time). When using a display with a refresh rate of 60 Hz, theoretically this would be 16.7 ms. However, in my PC, the avg_frame_time was about 27 ms when the drifting patch was drawn using the numeric.js, and was about 440 ms using the math.js.

Using the avg_frame_time, it is possible to roughly calculate the speed of the drifting patch. For example, if the avg_frame_time was 30 ms and the drift property was specified as 10, the gabor patch drifted by the angular velocity of 10 degrees during 30 ms.

This file demonstrates how to present gabor patches.

This file demonstrates how to present a drifting gabor patch.

This file demonstrates how to change the tilt of the gabor by pressing keys.